Posted on 14 May 2011 by craigjameswilly

I hate the European Union’s PR efforts. Over-generalizing very slightly, they could be characterized as “universally shit”. The Commission in particular is guilty of funding high-budget bizarre and even incomprehensible videos, whether it be the two-part “Adventures of Euro-Clooney and the Innovation Crystal Ball”, the “Creepy One-For-All Soup” (succeeding in taking a decent, concrete initiative and making a magnificent turd of it) or the “Attack of the Flying Sci-Fi-Future-Creating Paperwork”.

If you only saw this of the Commission, you would be forgiven for believing the organization was entirely made up of spendthrift, utterly out of touch megalomaniacal bureaucrats with psychotic penchants for magical thinking. For the record, and knowing quite a few people in the Commission, I don’t think this is the case but clearly some people in DG COMM need to be seriously reprimanded and perhaps have their heads checked by professionals. 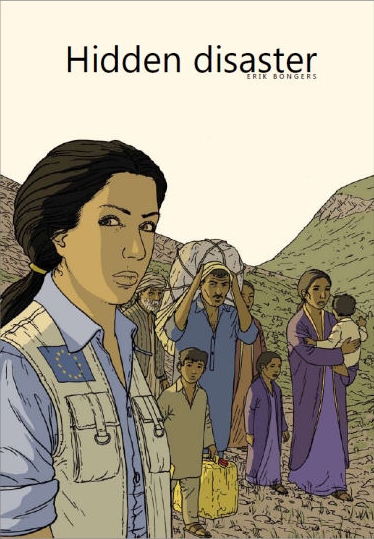 Having said all this, I also feel I should praise the Commission when it does something reasonably well. I discovered this comic book in the Commission’s information center and it is good in the sense that, if I had a child, I would give it to her to read. She would come out of it more informed about the world, might be inspired to volunteer for humanitarian work, and might even find the 40-page story entertaining (I need a youngster to confirm).

A .pdf is available in five languages here and you can see some more of the Belgian author’s work here. Belgium incidentally has a long history of comic book-writing, its artists producing many of Europe’s most famous series including Tintin, The Smurfs and Lucky Luke.

Flying over the disaster-struck mountainous country of Borduvia.

The book stars Zana, a field expert for the European Commission’s Humanitarian Aid department (more commonly known as “ECHO”) as she attempts to bring relief to the flood-stricken people of “Borduvia”. Though the latter looks suspiciously like Af-Pak, the disclaimer assures us it is “a wholly fictitious story” in which “[a]ny resemblance to real people is entirely coincidental”. Good to know.

The plot is very straightforward and there is only the very bare bones of an “intrigue”, if it can be called that. However, the story carries you along and the scenes depicted are striking and evocative including panoramic views of Brussels, helicopters swooping over devastated villages and even our protagonists discovering the stench of bodies buried beneath tons of rubble.

Integrated into this, mostly seamlessly, are explanations of how ECHO and the Commission more generally work: ECHO’s division into regional “operational desks”, Zana’s drafting of situational reports for headquarters (“sitreps”) and even the outsourcing of the EU’s humanitarian work to NGOs (eg: the Red Cross or Oxfam getting money from the Commission for a specific EU project). The latter point is fairly important for understanding in general what the Commission does and does not do.

The reader also gets a sense of the challenges posed by a humanitarian crisis in a Third World country. This includes the poverty, logistical problems and lack of infrastructure, the control (in this case) of certain disaster-hit areas by armed rebels, trouble with semi-literate soldiers, the need to talk checkpoints guards into letting you past..

The book is what I would call effective propaganda in the most positive sense. The heroine can be readily identified with and one gets an impression of ECHO – with its own lingo, Brussels-based “Crisis Room” and concrete action in the disaster area – as a genuinely useful and even “sexy” organization which a young person might aspire to find meaningful work in.

How close this book is to the reality is beside the point. I suspect however that ECHO’s work is similar to the bittersweet mix of genuine idealism and political compromise that Samantha Power wrote about so well in Chasing the Flame, her book on the life and work of the Brazilian UN diplomat Sergio Vieira de Mello who died in Iraq in 2003. In any event, young people should, on occasion, be inspired and educated by their elders. For that I’ll tip my hat to whoever produced Hidden Disaster and will give a copy to some of my very young cousins when I have the chance.

This entry was posted in article, lighter side and tagged communication, ECHO. Bookmark the permalink.